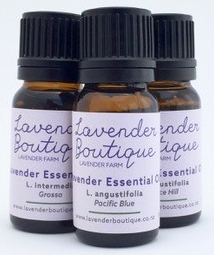 Welcome to Lavender Boutique.  We grow six varieties of lavender  - 4 varieties of L.angustifolia (English Lavender) and 2 varieties of L.intermedia (French Lavender) on our small farm tucked under the Tararua Ranges outside Masterton. (As shown in the  photo on the left.)

The lavender is grown in accord with organic principles.  Harvesting, weeding & pruning is all done by hand.  Each summer lavender is harvested and either distilled for essential oil or dried for craft & cooking purposes.  A variety of products are for sale on Lavender Boutique’s website www.lavenderboutique.co.nz

Lavender Boutique is relatively new;  the first planting was in 2006.  Since then Lavender Boutique is very pleased to have won many awards for the quality of its lavender oil.  We are very proud to have twice won the Dennis Matthews Memorial Trophy (in 2011 & 2009) for the best lavandula angustifolia in New Zealand. Both these 'best in show' awards were for the 'Avice Hill' variety.

Our Awards - as judged by the New Zealand Growers' Association

Please confirm you want to remove all the items in your cart.

Please Login or Order as a New Customer

When you've finished you'll have the option to create a password which will allow you to save your details and make your future purchases even faster.

Are you sure you want to log out of the site?

Thank you, your message has been sent successfully.